Imagine my surprise when a noted newspaper photographer said flatly that how we communicate today – everything from politics to PR, advertising to the Internet – was influenced by and is the genius of one man.

Washington Post photographer John McDonnell and I were visiting recently during a holiday get together, and the pieces of a puzzle all seemed to fall into place. John said that one individual came on the scene in the late 1970s who gained immense image-shaping influence, and his style singularly has changed how we perceive the world, events, happenings and major leaders ever since. He presented a brilliant thesis about the late Michael Deaver, and I agreed with every word.

“Mike Deaver was the single person who changed the way we see the world,” John said. “Deaver’s style of image-making extended far beyond his skills to position the image of Ronald Reagan for the presidency, and then, as Deputy White House Chief of Staff in the Reagan Administration, shaped the Reagan perception into legend.”

John should know. As a distinguished photojournalist, he has covered nearly ever major story in America over the last 40 years.

“It was all about the perfect image and soundbite for the media,” John said. “When I would want photos of Reagan, I would find him in a room with perfect lighting to favor Reagan. Deaver had ordered that. I would be ushered in by Deaver – ahead of patrons who had paid $10,000 to meet Reagan – for immediate access to get outstanding photos. Deaver and the patrons knew the influential power of the media’s images.”

John and I are in solid agreement – The art of three simple and clear messages that leave lasting and favorable memories, the perfect images, and the devices for staging events that change how the world sees things all came from Deaver’s genius and has been copied by very savvy business people and politicians ever since. Few people and companies back then and even now ever consider the image-enhancing payoff of lighting an event for TV and still photographers. And, that’s only a small part of the Deaver magic.

Ever wonder why there has consistently been so much great media coverage of events staged by the late Steve Jobs and Apple? Everything was provided for the media to get stories – Hollywood-style spectacle, passionate and authentic messages, timing, purpose, lighting, access. Nothing left to chance but rather all control over the media. Jobs knew and used Deaver-style.

In my most recent book, Making News in the Digital Era, I wrote my admiration for Mike Deaver, with whom I had worked. Here’s an excerpt:

Perhaps no person has left a greater and more positive imprint on the practice of strategic communications worldwide over the last couple of decades than the late Michael Deaver. 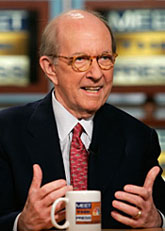 Mike Deaver was sometimes accused of being an expert at media manipulation. It is my guess that whoever alleged that harbored a good deal of envy for his talent. There is no question that Deaver made the contemporary concept of “photo op” into an art form to achieve the rewards of great media coverage, whether “spontaneously” manipulated or otherwise.

Deaver became famous as the image-maker for President Ronald Reagan. He was a master at staging visually memorable symbolic events—from the fall of the Berlin Wall to the fortieth anniversary commemoration of the invasion at Omaha beach. Deaver’s artistry created lasting impressions on millions of us around the world.

Former first lady and friend Nancy Reagan said Deaver’s greatest skill “was in arranging what were known as good visuals—televised events or scenes that would leave a powerful symbolic image in people’s minds.”

Deaver was nearly always behind-the-scenes, advising not only President Reagan but countless other leaders—heads of state to titans of industry—on the value of speaking with a clear voice and wise perspective. He was a leading example of people who have changed the world by knowing how to communicate a message, inspire greatness, and create a lasting great impression.

His secret for great communications was to help a leader develop an ability to translate the most complex issue into just a couple of clear sentences using simple words that would lead to positive change. In other words, leaders should take a moment to step back from all the chaos, look at the big picture of what needs to be done, and say it—in a few easy to understand words.

After leaving the White House, Deaver took his quiet manner and enormous talent to independent PR agency Edelman Worldwide, where he reshaped the practice of public relations and helped successful organizations around the world become even more successful. There, I learned from him and treasured his friendship.

Just before his passing in August 2007, Deaver was asked by his colleagues at Edelman to describe the few great communicators he had known, including President Reagan and Dan Edelman, founder of Edelman Worldwide.

This is what Deaver said:

“They, and a few of us, got into the world of communications when it was a world of print … then radio and TV and now the Internet, e-mails and blogs … and yet their values remain the same today—

“But the world IS CHANGING,” Deaver told his colleagues and friends. He quoted an excerpt from a column by Thomas Friedman in the New York Times. Friedman had written:

What was important to Deaver was “how” we differentiate ourselves in a world that has become so exposed and so easily copied. He talked of getting your “hows” right—how you build trust, how you collaborate, how you lead, and how you say you’re sorry.

“More people than ever will know about it when you do—or don’t,” he said.