Jay Hunter Morris absolutely captivated the world of opera earlier this year with his performance as Siegfried in Richard Wagner’s epic Ring Cycle, a saga about treachery, death, deception, mythical gods, magic swords, love, hate, dense forests with strange creatures and dragons. That all happened on the stage of the Metropolitan Opera in New York.

I know opera may not be so popular among some crowds in America, and, excuse me, but I don’t really care because I bet anybody would be thrilled by Jay the actor. This week, he pulled off another triumph … this time at the San Francisco Opera‘s production of “Moby Dick.”

Of his performance, the opera reviewer for the San Jose Mercury News wrote, “Jay Hunter Morris’s Captain Ahab is a force of nature:”

“The power of tenor Jay Hunter Morris, as Ahab, peg-legged commander of the good ship Pequod, spouting his words like water from the blowhole of a whale.

At Wednesday’s opening performance, in this adaptation of Herman Melville’s epic novel, he sang with a pressurized fury that practically shook the seats of War Memorial Opera House.

Think Jay Hunter Morris, a force of nature of the very best kind. And, he’s a heck of a nice guy, as well. 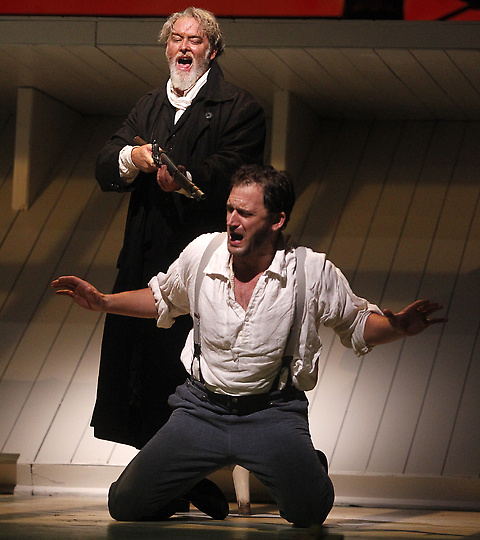