First, there was the Hamas propaganda video that purportedly showed buildings ablaze and people injured somewhere in Gaza, allegedly the result of an Israeli attack … in retribution to Hamas firing about 1,000 rockets into Israel this year, alone. Now, online social media’s anonymity is bringing out the crazies, many if not most making inflammatory anti-semitic remarks about Jews and Israel. 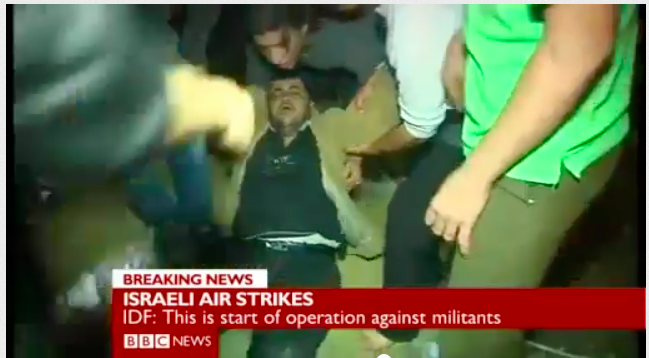 Take a look at this Hamas-shot propaganda video that has been aired repeatedly by CNN and BBC News, among others At 2:11 into the video below, a supposedly “injured” man is lifted by his pals and carried away. Yet, miracle upon miracles … there he is again – same guy – at 2:41 walking around, not a scratch. CNN continued to air the propaganda video even after the scenes had been discovered to be fake.

A news video editor with a week’s experience would have immediately spotted the fraud. But, not at CNN or BBC News. The level of tolerated dishonesty in mainstream news is higher than I have ever seen.

The world’s news media – hammered by economic cutbacks, layoffs, and an inability to keep up with the Internet – has decayed to a miserable and ill-informed state. The rich experience and knowledge of history that once existed in newsrooms is no more. As a result, the media is ripe for being taken advantage of.

Over at Twitter – where anyone can anonymously post any falsehood without accountability – some people are targeting @IDFSpokesperson, the official Twitter account for the Israeli Defense Forces, with vile anti-semitic remarks. One complained that Hitler should have killed all Jews.

On yet another front, Internet hackers – under the guise of “Anonymous” and in support of Hamas terrorists – have targeted many Israeli government and military websites.

Flag of Israel flying over a house near Tel Aviv.

Hamas today blasted its Iran-made rockets at Jerusalem, the Holy City, considered off-bounds when even Saddam Hussein attacked Israel in 1991. Jerusalem is a place where Jews, Christians, Muslims and others have worshipped for centuries.

Hamas terrorists are not aiming at Israeli military targets. Their rockets are used as weapons of terror.

Many Israelis have been warned to stay close to bomb shelters, even in Tel Aviv.

[Footnote on Sunday, November 18, 2012] CNN’s Anderson Cooper, while explaining that CNN will not air the faked video again, admits that CNN uses UNVERIFIED video in its news reporting. You can watch Cooper here: http://www.liveleak.com/view?i=215_1353193694

BBC News said in a statement that it saw nothing wrong with the faked video.