It wasn’t too long ago that the slang known as “valley girl speak” was the brunt of jokes. There was even a 1990s movie – “Clueless” – that poked fun at “valspeak.” 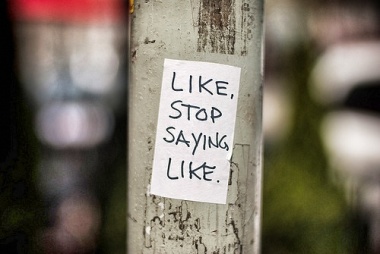 Valspeak uses the words “like” and “so” as a hedge at the start of sentences. “So, like, he said … and, then, like, she said” is common in the fad. In valspeak, the word, “so,” is frequently used so often to start many sentences that it becomes distracting.

Statements spoken in valspeak end with a rising intonation – a dramatic affectation – as if asking a question or suggesting the person speaking is uncertain of what they are saying.

Valspeak has always seemed an obtuse and, well, clueless or dummied-down style of discourse except for the fact that it has crept across America to become a common dialect lexicon. Today, it’s everywhere, from news discussions on NewsHour, CNN and Fox to the White House, State Department and Pentagon.

We hear reporters use valspeak to paraphrase in their own words what they surmise to have been testimony in Congress or conversations among government leaders they want to share … “like, the senator said … and then, like the general responded.”

President Obama epitomizes a form of valspeak when he addresses leaders of foreign governments as “you guys” or his frequent jock-talk way of beginning a statement with “Hey, look, like, ya-know what I mean …” No, sir, I don’t know what you mean. Please tell me.

Whether it’s an attempt to be viewed by others as cool or hip or macho or something else, many Americans have adapted this casual manner of speaking that replaces clarity with vague jargon.

In addressing the nation recently about the U.S. initiative to combat the rapidly expanding ISIS terrorist threat in the Middle East, President Obama used the phrase “take out” or a variation of it three times. “We took out Osama bin Laden,” he has often said. Why not just say, “we tracked down and killed bin Laden.”  That’s clear, that’s what the U.S. did.  “Took out” is vague.

I guess how the rest of us butcher language doesn’t matter as much as the President. How is his frequent use of jargon interpreted abroad? Do people in other countries understand what he is trying to say by using jargon rather than clarity? Or, are some left to think that the U.S. “took out” bin Laden to get Chinese.